I figured I should write down Grace's birth story since I still have yet to write it down in her baby book and I don't want to forget.

I had my 40 week ob appointment on February 12. Needless to say there was no change, I was still half a centimeter dilated and my doctor asked what I wanted to do. I told her I would love to be induced on my due date if that was possible. I have no desire to ever be 41 weeks pregnant. She asked if I minded checking in the evening of my due date (February 14) to be induced the next morning since she was on call that weekend so she could deliver my induction. That's the plan we decided on so Thursday night (February 14), Derrick and I had a romantic dinner at Panera before checking in to the hospital at 6:00 pm. They gave me cervadil and hooked me up to the machines to find out that I was having contractions, I just didn't realize it. I was also given an ambien to sleep and she told me she would give me another if I hadn't fallen asleep in an hour. I ended up needing the other ambien but then fell right to sleep. Holy pain, I woke up in the middle of the night with some intense contractions and was given pain medication to help me go back to sleep.

They woke me up the next morning to take a shower and get ready for the day ahead. I threw up from the pain medication. At the nurses shift change at 7 am, the new nurse came in and told me I could have my epidural whenever I wanted, so, of course, I told her right now would be amazing. Before the anesthesiologist came in, my ob broke my water and said there was meconium in it (which just meant my little girl would need to see the neonatologist immediately after birth) The anesthesiologist was wonderful and I had my epidural in and was pain free by 8 am.

They started my pitocin and that's when the excitement started. I was 2 cm dilated when I woke up that morning. However, every time they turned up the pitocin and I had a contraction, my sweet little girl's heart rate would drop. It wasn't something to be concerned about at first because they weren't late decelerations. I was checked again and was 4 cm dilated. At some point the nurses became concerned about Grace's heart rate during my contractions. They moved me from side to side to see if it would improve. They put me on all 4's on the bed to see if it would improve (mind you, I cannot feel my legs because of the epidural) The very last thing they tried was my doctor gave me an amnio infusion to put fluid back into me to see if that improved anything. She had warned me at that point that it was becoming more likely I would have to have a c-section. I didn't know it at that time but my husband had texted my parents (who were on their way to the hospital) and told them to hurry because it was looking like Grace would be here VERY soon. The amnio infusion seemed to just make everything worse. Now not only was Grace's heart rate having late decelerations but it got to a point where they couldn't find her heart rate at all.

This is when everything became a blur of frantic movement. The nurses started detaching me from the monitors on the wall. My doctor told me I needed a c-section NOW and had me sign a release form and the next thing I knew I was being rolled down the hall to the operating room. I noticed that my husband (a doctor) looked nervous but I guess because of how quickly everything was moving I didn't realize how much of an emergency it actually was. I was rolled out of my room at 10:15 am. Once I was in the operating room and attached back to machines, the nurse told me they were able to find her heart rate again and that everything was going to be fine. I was scared at that point more just because I didn't fully understand what was going on. I passed the pinch test (where they pinch the shit out of your belly to make sure you can't feel anything) and the cutting started. All I felt was a lot of pressure and next thing I knew they said she was out. It seemed like forever between then and her first cry but I know it actually wasn't. Everyone was commenting on how calm I was in such a stressful situation but that was really from not realizing how much of an emergency situation it actually was and how fast they needed to get her out. They brought her over so Derrick and I could see her and then she was whisked away to be checked out. Derrick went with her while I was sewn together and taken to a post op room. It was 2 hours from when she was born until she was brought to our room. I am so grateful for a wonderful ob and hospital staff that made sure my little girl entered the world safely. Hopefully, my subsequent birth experiences will be less exiting. 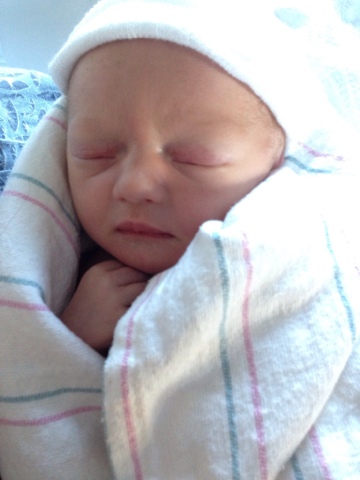 Brittany
20-something wife of a medical resident living in Charleston, South Carolina. Fur baby was born on February 11, 2008. Married on June 21, 2008. Addicted to southern food, music, dancing and my friends. A shopping addict with a penchant for late night online purchases. Welcome to my life.